Did I tell you that I LOVE VANCOUVER?  Did I also tell you that I have good fortune with timing?  Well, I know how that happens, and I will never take what He does for granted, and I constantly thank  Him for watching over me.  I have found that first reviewing the pictures I took during the day helps my memory as to what I did.  The few images in this post I have selected from just under 100 I took today – boy is my new Canon S95 handy!

At breakfast I talked with a couple from the Ukraine, and a mother and daughter from Dubai, and then I had a full 11 hour day “on the run.”  The SkyTrain Canada Line that I have been travelling is actually a subway in our parlance.  I have been riding in the front seat watching ahead in the tunnel.  Today I suddenly remembered that this is what I always did in New York City, either when visiting my grandparents, or when by myself.  And today I repeated another favorite thing of mine from decades ago.  I would travel by the New Haven Railroad to Grand Central Station, get on the subway to Battery Park, get on the Staten Island Ferry for 5 cents, ride to Staten Island, not get off, and return on that same nickel.  Once a “shunpiker” always a “shunpiker.” Guess I am “dating myself!”  On the weekend in Vancouver it is the same fare rate regardless of zone you are travelling on the SkyTrain, so I paid my $1.75 waited a minute for my train, arrived at Waterfront Station and walked to the SeaBus to North Vancouver.  Of course I only waited a few moments for the ferry that crosses the bay in 12 minutes, takes 3 minutes to offload and load (what an efficient in one side out the opposite system!) and then a 12 minute return.

Arriving Back to Downtown - Terminal to Left - Canada Place to Right

Next on my schedule was to go to the unique (and it was) Capilano Suspension Bridge Park.  I walked back to Canada Place, the shuttle bus was there, I walked up and got the almost last seat before it left moments later – timing/no lost time.  A tourist attraction for almost 100 years, I was very impressed and pleased that I went, and I spent almost 3 hours exploring, and of course reading the history in that part of the exhibit.  As an aside, if the Statue of Liberty was in the gorge, as you cross the bridge you would look into her eyes. 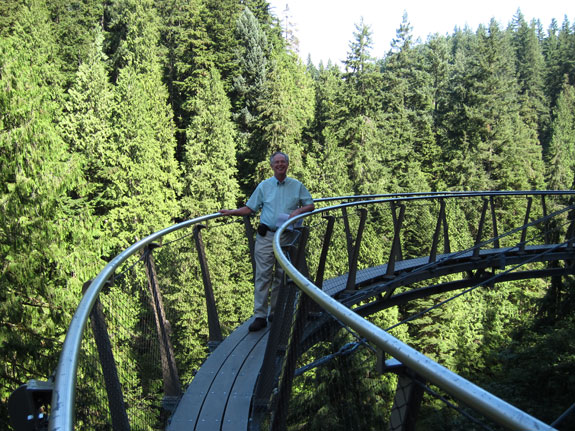 Yes, me on the Cliffwalk 300 feet in space

The Clikffwalk  has been only open 2 months, and I was advised to head there first, but to be truthful I never felt overwhelmed with people here.  The Tree House walk was so different I had to do it, and I would go again!!! 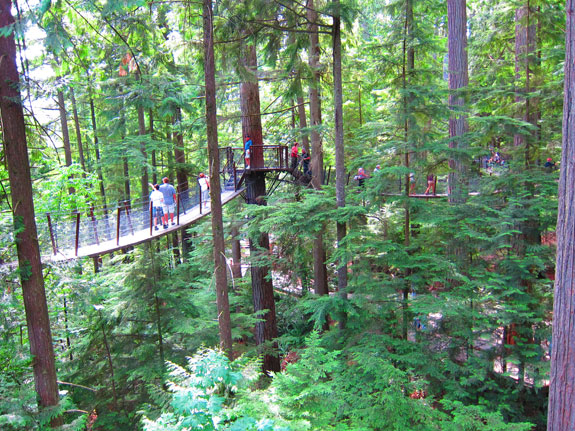 Just part of the Treehouse Walk - A Squirrel's Eye View

I exited at about 1:30 PM having spent an enjoyable almost 3 hours, and of course, only had to wait a few minutes for the shuttle bus to arrive.

I thought I would head over to the Chinese Garden after walking though Gastown, but decided just to enjoy this original part of the city in more depth instead, and I did.  The largest attraction in Vancouver is the old steam driven clock, and my timing was right to get this image of tourists watching it play a 16 note tune on the hour.

The famous, most photographed Vancouver landmark - The Steam Clock

I spent some time in Gastown working on my new hobby – “Windowscapes.”

I wanted this Flatiron Building, but anyone can take that image. Then I turned around and...

Back I went to Canada Place to catch my trolley’s Red Line to revisit Stanley Park, and get to the stop where I would walk to the False Creek Ferry and use my free pass to cross the creek to Granville Island for the Market and the boutique shops.  I arrived on the island after 5 PM.  Did I tell you that one of my favorite things is taking images at marketplaces?  Well, so far the vegetable and fruit market in Montreal tops all, and the Bazaar in Istanbul is fantastic for colors and textures of spices and other items, so the market here is not my favorite, but still worthwhile.  I had another bite to eat here, and then walked about an hour along the waterfront and through some parks back to my B&B.

Still need to work on my plans for tomorrow.  I have a 4:10 PM flight which I of course do not want to miss, so I will not run too hard.  BUT, I want to get back soon as there is so much to enjoy in the area like a train trip to Whistler, Vancouver Island and Victoria, and so much more here in Vancouver itself.  SO, help me!!!  If you see any airline sales to Seattle or Portland for $49 or $99, let me know.  From either of these spots it is an easy Amtrak ride to Vancouver, and then adventure – I would do it for even just 4-5 days.  Anyone game?

I arrive in Montreal Monday night at Midnight and have about 8 hours before my bus back to Burlington, so, assuming I can get “on-line” at the airport in Montreal you will hear from me. 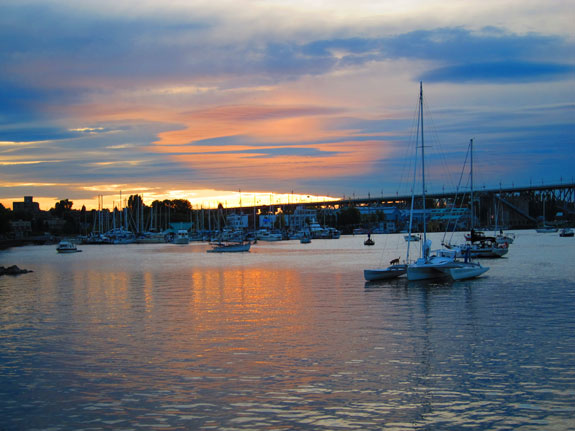 This entry was posted in 2011-c - The Canadian - By Rail Toronto to Vancouver - (Aug). Bookmark the permalink.