Happiness is having “toonies” in your new camera case on your belt — ATM worked today!

I am convinced that there must be a law somewhere about having so much fun !!!  But the “having too much fun” police have not stopped me yet.  Had muffin, coffee and juice at the hotel, checked out and walked to the Via Rail Central Station arriving just before 10 AM (ends up there is a 10:10 train to Toronto – but who is in a rush?)   My paper receipt said I could scan at a machine to get my ticket, but I like to talk to “real people” and no customers were in line at the counters.  I walk up, show my paper receipt and the clerk replies, “you are going on the trip of a lifetime!”  She continued, “I have had customers who travel from Toronto to Vancouver, arrive in Vancouver and cross over to the train to return to Toronto – they love it that much.”  In an instant I had my “real ticket.”  I verified that I was served a meal in business class on the way to Toronto, and she replied, “yes, and you can go relax in the Panorama Lounge across the way, with complimentary beverages, etc., and they will call you for your train.”  So, I am with computer, newspapers, and my books, shoes off and enjoying.  I know I have two neighbors ready to take the journey with me, so while you are waiting for my next few words, here is Via Rails Page on THE CANADIAN for you to read.

1:30 PM – On-board Train 61 almost 2 hours from Montreal and 3 plus hours to Toronto.  Just finished lunch (Salmon, real linen napkin – not to mention 3 glasses of wine – I am not driving).  Rolling country side is farm land.  Server just came by with coffee (I passed), but he asked, “you are on Number 1 tonight? You are so lucky!”  Yes, that is the designation for The Canadian – gives an idea of Via Rail’s ranking – Number One.  “Make sure to have the roast beef,” he said, “it is wonderful.  I have made the trip six times, but working – still wonderful the views.”  Later on I plan to take a video of this spacious car to post.  Well, back to window watch, book, and later a video for you.

2:45 PM – Annoucement made that we were pulling into Kingston, and the train would be full, so I thought I would take a video.  Not great because of the lighting, but will give you an idea of this spacious car.  Just offered and received another glass of wine – sure worth the price of admission.  Well, it ends up that the “train full” annoucement did not apply to Business Class, but they did bring a few folks forward (I am in Car Number One in the front), and I heard it explained to them that they could have drinks, but would have to pay back in the club car.  So, now let me try to upload the video.  It took awhile in Rome, let me see if it will be faster now – plus maybe I am getting smarter.

3:50 PM – Video upload is just not working.  I have to learn how to compress the file, but in searching on-line to find solutions I see many people have the same problem.  I could always try YouTube and do a link, but I would prefer to solve the video with WordPress. So, let me post this, and play again later. BYE    PS – as I was putting everything away, I realized I could at least give you some images from my seat. 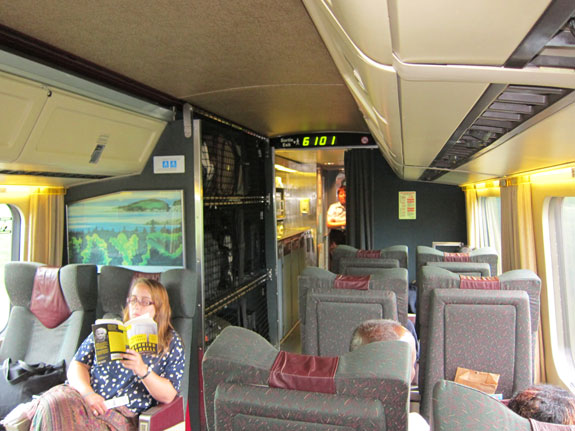 Looking forward from my seat in Car One on Train 61 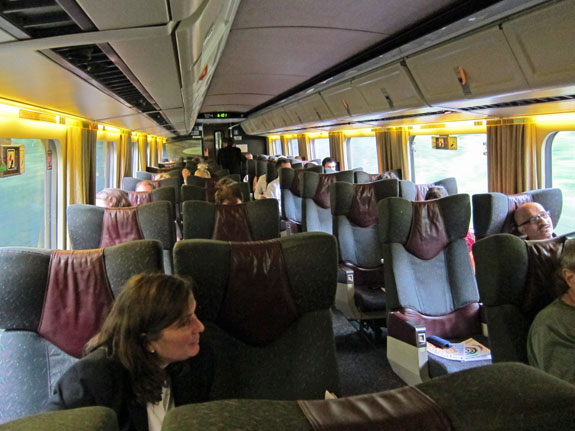 Arrived in Toronto Union Station, and found the spot I will be departing from.  Check-in for the train is at 8PM at the Panorama Lounge.  So I explored the station and headed outside – not something to do in Toronto at 5 PM when everyone is heading for their trains home.  All I know about Toronto is that it is a modern, growing, multi-national city.  As the train was arriving I was overwhelmed with the new high rises, and the CN Tower (a space needle) reaching for the sky.  So I headed that way to explore and maybe go up to the observation deck.  I stopped at a tour bus, two-hour circle with narration and hop-on-off, but was afraid things may get tight.  Was about to buy my ticket to go up the CN Tower, but the clerk said, “and, there is only an 80 minute wait in line now.”  Sorry, I don’t do lines, especially with only a few hours.  So I wandered the area and found the train museum and round-house.  This entire area had been devoted to the rail yards where up to 300 cars could be readied at once for their next trips.  Those facilities have been moved five miles west now that this is such prime property, property in fact that in the early 20th century was reclaimed from the lake.  I am just finishing a bite to eat now, and then will head back to Union Station – it is grand!  Guess I will explore Toronto someday when coming this way on The Canadian from Vancouver.  This is quite a destination because I saw/heard tourists from all over the world.

In the lounge with luck I can plug in (battery low) and post these last few comments for the day and email you.  Remember, connections will be sparse the next three days, hopefully I will be able to update you as I am stopped in Edmonton – late Wednesday or Thursday, I forget when.

In the lounge now, just got checked in, and have my meal reservation times for tomorrow.  Mari got back to my email, and yes my .mov video files are too large, she told me the best formats she converts to, and I just have to learn how to convert them — maybe when I get home I can have just one post with videos, and then be ready for the next trips.  Bye, RAY

This entry was posted in 2011-c - The Canadian - By Rail Toronto to Vancouver - (Aug). Bookmark the permalink.