Good morning, It is Tuesday, the day before we leave, and I am sitting on the patio enjoying the Italian weather and busy researching “on-line” as many details as possible about the sights I saw on Sunday and yesterday in Florence, both to share and to expand upon what I saw and learned.  But it is time to start writing too, what will probably be my last post from Italy.  On July 4th I had a record 45 visits to my “blog” – a big thank you – readership has dropped a tad, so I hope that I have not bored you.  Of course, if you have signed up for automatic messages to my posts, and just read the email that does not count on the stats that are recorded.  Actually I look forward to expanding my “blog” with SHUNPIKING history and adventures in New England, and as I said this is as much for my pleasure as it is to share.

First thing Sunday we visited an Etruscan Tomb at the foot of the hill that was discovered for the first time in 1927 with a second entrance found just 20 years ago.

Ceremonial Entrance to the Etruscan Tomb

The Etruscan TUMULUS TOMBS  date from the 7th – 4th century B.C. and are mound tombs devised to cover the dead with stone and earth.  This is just one of the many archeological sites that dot the entire area.  David and Alex had ridden the scooter down, and Mari drove me in her Dad’s jeep so on the way back she drove me to the top of the hill to the Basilic Shrine of Saint Margaret of Cortona – the patron Saint of Cortona who arrived in Cortona in 1272 and died 27 February 1297.  Her story of penitence from sinner to saint is particularly touching and I encourage you to read more.  The mistress of a young nobleman for nine years, when he died she was expelled from his castle with her young son, and returned to her father who also turned her away.  In prayer she turned to the Franciscans for guidance and settled in Cortona.  She founded the hospital but soon lived for nine years as a recluse in silence and meditation. 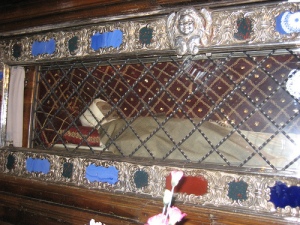 She died with a mysterious sweetness and fragrance surrounding her which those in her presence recognized as a sign of her great grace and holiness.  People soon began to declare her a saint, and she was canonized in Rome in 1728.  On the altar in the church lies her incorrupt body – often the sign of a true saint.  No pictures are allowed in the church, and if I had my scanner I could show you the wonderful image in the brochure I bought, but here is one I found “on-line.”  I walked back down the hill following the path with wonderful mosaics of the stations of the cross  which I later saw the original sketches for in the Museum of the Diocese of Cortona.

presses there.  Mari had mentioned my interest in printing, and we got a special view of an old Cortona letter press print shop that upon the owner’s death found its way there for preservation and display.  As you may know I have been a printer since I was 12, have always enjoyed printing and am currently setting up shop again.  This interest and my interest in photography from the same age I am sure helped contribute to my interest in and love of books.

Upon return we headed off to Mari’s uncle’s place in the Chianti country about 40 minutes away for a fishing excursion.  Her Dad loves to fish and enjoy sharing it with Alex.  Her uncle has several ponds on his land well stocked and it usually took all of 30 seconds for Alex to hook a bass or carp exceeding 12 inches – amazing!  It was a quiet spot, fresh breeze and relaxing. Prior to leaving we went to her cousin’s home on the property (which exceeds 150 hectares – about 370 acres).  As we approached I commented to David that I thought it was a condominium complex.  Was I wrong, it was a 14th century farm complex overlooking a valley of fields with mountains in the distance with a few scattered ancient farms.  The entrance way through a portico opened to a maybe 80 foot wide terrace with a hot tub to the right, and with a pool extending most of the way across which appeared to be flowing off the hillside.  Both the grounds and buildings were spectacular and it was a treat to get this view of the Tuscan countryside.

Monday was my day in Florence, and I arrived by train at 9:50 AM at the Stazione di Santa Maria Novella which was built in 1935 in the “Functionalist” style – quite a difference from Renaissance Florence, but truly a fine architectural example (here goes the architectural historian side of me again).  I had studied the Rick Steves “Renaissance Walk” audio tour, had it with me, and planned on doing the city that way starting at the Duomo with Brunelleschi’s Dome.

The line moved fast (unlike the line for the walk to the top of the dome), and as I entered inside I was able to join an English tour (donation only at the end) which was very well done by an independent group of students, and highly I recommend (Bill and Dutchie take note for your upcoming trip, and I have more to share later with you).  From there I headed down Via Dei Calzaiuoli which is the main shopping street with fine shops for the tourists.  The Steves’ walking tour provides details on both the interior and exterior of the Orsanmichele which was built in 1337 as a grain market.  There appeared to be a ticket booth at the entrance, but I later realized that this is for the performances held upstairs.  The guide explains the statuary going counterclockwise to the entrance at the rear.  Well, what a treat to enter inside and see the extraordinary altar that is as it was installed in the 1350s when the main floor was converted to a church.  I enjoyed the frescoes, internal architectural features, and as I was exiting there was a small hidden stairway saying “free entrance to first and second floors” (Bill and Dutchie take special note).  The vaulted ceilings, WOW, and when I climbed to the top floor the views of the city are one of the highest and since I was sharing it with only a few people, not many people know of this gem.

View of the Duomo from the Orsanmichele 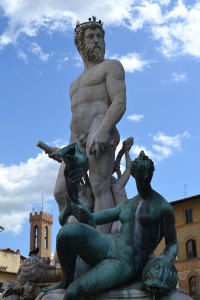 Next I enjoyed the Piazza della Signoria which is loaded with statues including Michelangelo’s DAVID.  On the way to the Arno River and the Ponte Vecchio I passed the famous Uffizi Museum with its renowned art work.  It is closed on Monday, but you also need to make reservations for tickets way in advance.  Reaching the river I turned right and got some nice images of the bridge (built in 1345) with its gold and silver shops that have been there since 1593 when the odious butchers and tanners were expelled (they dumped their waste into the river).  I crossed the bridge, turned right and found a small café which opened onto the river where I had a traditional bite to eat before I headed back to see and tour Santa Croce, a Gothic Church built in 1294 which contains many tombs including those of Michelangelo and Galileo.  The disastrous flood of the Arno River in 1966 rose 15 meters in the church, and as you may recall destroyed much art in Florence.

The small museum with the Santa Croce has nicely displayed many of the works, now restored.  I was tiring after another 8 hours on my feet, so I headed back to the train station to catch an hour earlier than planned train at 6:13 (yes Italian trains are as prompt as the Swiss).  All in all, Florence is a wonderful day sojourn to get a flavor of a Renaissance city – in fact where the Renaissance began.  The main points can be walked in a day, but to fully explore the outskirts and museums many more days would be required.  For Florence I used my Rick Steves audio walking guide and the Eyewitness Travel Guide for Florence & Tuscany.  Having had the opportunity to see innumerable travel guides in the house with 30,000 I recently worked in I can say that in addition to the Rick Steves’ guides I really like the Eyewitness guides which claim they are “The Guides That Show You What Others Only Tell You.”  There are facts, maps, good illustrations and no dated material about food and lodging.

As I am writing I have less than 16 hours left in Cortona before we head to the airport.  This afternoon I visited the Museum of the Diocese of Cortona, which I am so glad that I saved for the end.  This is the museum that has Fra Angelico’s ANNUNCIATION (1436?) which is considered one of the most beautiful wood paintings in Italian art, and worth a trip to Cortona.  In addition there are many religious artworks from churches in Cortona including a circa 1298 painting on a panel of Margaret of Cortona,  which was from the original Church dedicated to her, and painted just a year after her death.  There are also two small statues from that church.  I had this small museum basically to myself, and the audio tour that I rented was very detailed and helpful in an understanding of the churches and development of religious art, one purpose which was to enable those who could not read to understand bible stories and history.  I do not believe I have ever seen so many exquisite pieces up close, including the most detailed and elaborate reliquary from the second half of the 15th century containing part of Christ’s vest.  I bought the museum catalogue and will get years of pleasure from it.

As I leave for home I have had adventures and now memories to cherish including the time  shared  with family.  But, I have another adventure planned in a few weeks when I cross Canada by train. As it is said, “stay tuned.”  Thank you for travelling with me, yours, RAY