Pub in Thomastown where I am sitting posting this

Last night, Friday, 13 May, and I am in Thomastown, Ireland.  I got more done that I planned today, and got closer to Dublin than I thought I would.  I am, however, typing this into my Word Processor with the hopes of uploading it later in a local pub – but that comes later.  Today I also had my first disappointment, but if you know me I always try “to make a positive out of a negative” and it worked again for me.

I left Kinsale for Cobh, and made it in 45 minutes using the little river ferry, saving 15 minutes from Google-maps – and that was another adventure.  I enjoyed the Queenstown Story in the beautifully restored Victorian train station.  Mainly story boards, videos and mock-up scenes, the exhibit covered Irish emigration both of convicts and from the famine, the Titanic (made its last stop in Cobh – then called Queenstown following the Queen’s visit in 1849, but changed back when Ireland gained its independence), the Lusitania, ocean liner history from emigration to tourism and its demise.  I then drove through the town along the waterfront, and it probably still has the look and feel that the emigrants would have seen when they were leaving their homeland.  My next planned stop far, far exceeded my expectations, and Betty, Scott and Rich it is time for a “road-trip” to Midleton and the Jameson Experience.  This was mentioned in the Rick Steves’ book, otherwise I would have never thought of stopping at the old distillery of Jameson Irish Whiskey which operated at this site for 150 years closing in 1975 when they built a new facility adjacent to the original 11 acres.  I asked several times, and unbelievably the equipment (including massive 160 year old cast iron waterwheel) and buildings remained unchanged for those 150 years (however many structures date to the 1790s), and just as hard to believe the facility (the largest remaining original industrial site in the British Isles, if I recall correctly) remained vacant and untouched until opened in 1993 as this fabulous and educational tour.  I can’t say enough good about this experience.  From Steves’ book I knew to immediately raise my hand when the guide asks for volunteers, and I was selected with a few others.  Instead of just getting a glass of Jameson Irish Whiskey we performed a taste test comparing Scotch Whiskey (Scotch whiskey is distilled only twice and has a smoky flavor), American Jack Daniels Whiskey (distilled only once and sweeter), and the three times distilled Irish Whiskey which is then aged for a minimum of 3 years unlike the others.  Well, no comparison – I loved the Jameson Irish Whiskey.  Well, we “tasters” were asked to put our names on our ticket stubs for the drawing of a prize – well surprise, we all got “official whiskey taster certificates” with our names.

Since I am not a city person, I decided to use the bypass around Waterford.  I also felt that since I do know about glass making, especially taking guests to Simon Pearce, even though Cathy probably paid for the Waterford Visitor Center that I did not have to stop.  Instead I headed to New Ross (where I thought I might stay) to see the Dunbrody Famine Ship.  It was my first disappointment – not a good tour, and believe it or not I do know a great deal about ships, even 19th century sailing ships.  Also, New Ross, a “blue-collar” town was a tad disappointing, so I continued on North hoping to find a little village with a B&B and pub.  Well, I did much better!

I decided to take a back road back towards N25 to M9 to Dublin – there were two towns on the route.  I almost knocked on the door of a hotel in the beautiful village of Inistioge, but continued on and soon spied the 13th century Grennan Castle. 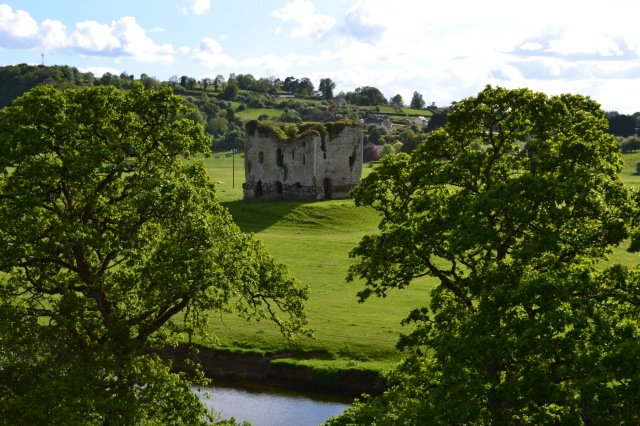 Well, round the bend (maybe a couple bends) I drove into Thomastown – an almost unspoiled 14th century Medieval Walled Town (with walls still remaining).  This is the place I had hoped to find for my last night – now to find a B&B.  I drove over the 18th century bridge, and there was a pub and B&B (and with an internet café – too good to believe).  I went it, found the owner, “oh, I have not done the B&B in years, but my friend back in town runs one in the castle, I will call him.”  Well, Ben had room, and it was suggested I walk back to check it out.  You see, not only are there narrow streets, they are circular one way, and in the early 19th century they opened up the side of the castle so you could easily get into the courtyard – the bartender thought I should check it out before navigating (reminded me of a narrow passage Cathy and I had to drive through to park our first night in Switzerland years ago).  The opening, however, is for a cart of the times.  Inside the courtyard I met Ben, and essentially there was a newer addition (20th century) with the rooms – BUT, I am in a medieval city and castle.  I walked around for a long time enjoying the town, and the Catholic church at the top of the hill.  In the village there is another church built within the ruins of probably a 14th or 15th century church.  I had dinner at a bistro across the lane which in 2010 was named with the best in Ireland – they have a second place in Kilkenny.

Well, the end of a perfect day and perfect week. It is about 10 PM here and I am going to walk over to the pub, see if his internet works, order a pint of Guiness, and hopefully upload this to the blog software, if that is not possible (not done it before) maybe I can copy/paste this to an email.  Thanks for travelling with me, as always, RAY 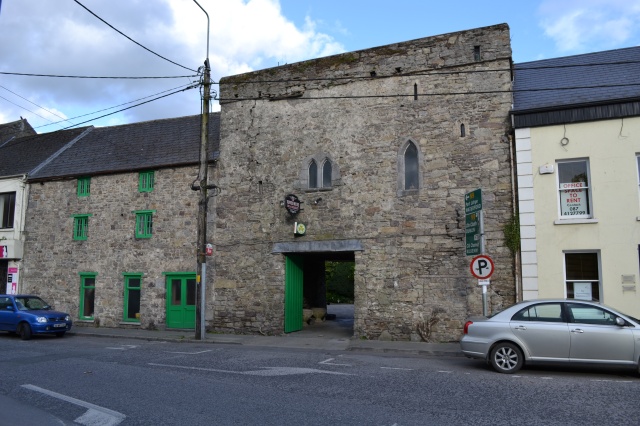 14th Century Town House Castle where I am sleeping tonight