Another day filled to completion, and then some.  Some rains as I was driving off the peninsula, but that was it.  I made it to Killarney in the time Google-maps said it would take, and had to continue just past the town/city to get to the Killarney National Park to see the Ross Castle and Muckross House.  Circling the town it is modern, and according to Rick Steves’ guide – can be missed – I agree.  It is a hub for name-tag totting tourists – UGH. 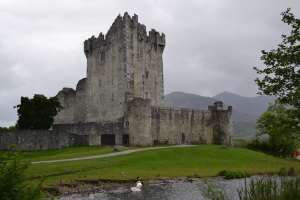 I first stopped at the Ross Castle, showed my Heritage Card and got my ticket for the 10:40 tour – about a 35 minute wait, but time to read all the information on the boards in the exhibition room.  One thing I find strange is at the Heritage sites there is great history posted, wonderful exhibits and lectures, BUT no books or booklets available at all recounting that history.  In fact, these government sites don’t even have gift shops as we do in the states.  I for one would have love to bought books on some of the places I have seen, so they have missed out.  I usually do not remember things well, but certainly did at the Ross Castle as to its structure, demise, and restoration – opening only in 1993.  I will not go into the history now, including the story of the Philadelphian (who rebuilt Washington, DC including the White House under Truman’s administration – I have seen the pictures of that years ago – quite a story) who owned it and gave it to Ireland, but I have “fast facts” that I learned on the tour.  The sparse furnishings are original pieces of the 16th and 17th centuries that would typically be found in such a defensive tower.  I asked about the way in which the rushes were held in a “Rush Lamp.”  After the rushes are bound they are clipped into the stand horizontally, and lit at both ends – thus “burning your candle at both ends.”  In the bed chamber there was a niche in the stone work above and adjacent to the chimney.  This was to keep a newborn infant, “a cubby” warm – thus a “cubby hole.”  Life expectancy for people living inside such a tower was 28-34 years due to respiratory problems from the lime in the whitewash walls, smoke, and the lead in the pewter plates and the lead used in the pottery glaze.  Sleeping was done usually in a sitting position because of the respiratory problems.  Folks living outside lived much longer — better air, and utensils usually of wood (treen ware).  I asked about a candle stand that had massive pegs to hold the candles – that struck my curiosity, but the guide explained how the stand was in the shape of a cross, and on 45 degree angles to the top are 12 candles – for the 12 Apostles.  No picture taking, but I made a sketch when I got back to the car along with these notes.  Oh, just so much to learn.

View from the front of Muckross House

I then toured the Muckross House, again a fascinating story.  The furnishings are as they were from the 1860s.  In fact, 6 years were spent in redecorating the house and grounds for Queen Victoria’s three day visit in 1861.  From my reading, once I parked I got my ticket for the tour, and then had 40 minutes to walk the grounds and grab a sandwich (finally a light meal).  It was about 3 PM when I was off again on the road – roads that became smaller again and intriguing with small villages.   From my readings I wanted to stop at Macroom, an unspoilt Market Town.  The castle at the entrance was once owned by William Penn’s father, and suffered its 5th fire when the British Army abandoned and burned it in 1920 prior to Ireland’s independence in 1922.  I spent some time walking around and should have taken pictures of the butcher shop and fish market – so inviting looking, both. 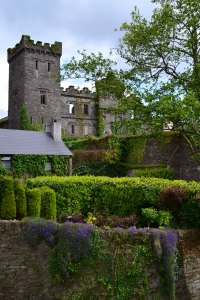 I arrived at my B&B in Kinsale at 6:15, and once I settled in I went downtown.  Kinsale – wow, talk about an old village dripping with charm and history.  Steeped in nautical history, and an important town in history (sadly most Americans don’t know their own history let along any history outside USA borders) I just can’t wait until tomorrow’s visits.  I saw a number of groups (one all students) around the Tourist Information office, but was confused because the various walking tours are during the day.  I moved up along one group of adults and started listening.  As they started walking I asked someone who seemed in charge if this was a private group.  He said it was a university sponsored tour for a group from France, Portugal and Spain in for a conference, and “few of them know each other, so please follow along.”  I did, it was informative, and I have added the Rick Steves recommended tour to my list for tomorrow.  I then had dinner (beef stew – finally a small portion) and came back to work on this post, but often hit some wrong keys and deleted, so it occupied a tad more time than it should have.  At any rate, off to plan more for tomorrow, I am so excited about Kinsale, but in retrospect each of my favorite spots (Cashel, Dingle, and now Kinsale) have been grand for different reasons.  Good night, RAY