On Tuesday I left BACK INN TIME, in St. Albans, VT, shortly after 9 AM and went down the hill to take US 7 north to Route 78 towards the border.  The plan was to traverse along the border to pick up US 3 in New Hampshire to see the Connecticut Lakes (the beginnings of the Connecticut River) for the first time.  It ends up that this was a longer trek than I imagined and my driving day lasted 14 hours – but was worth it (more later).  My weather for this trip’s three days was perfect sports car weather and no rain, but if Black Beauty or Blue Belle had been with me it probably would have been a different story and neither of them has a full complement of weather gear – have to fix that.

I turned north on US 7, “but wait shunpiker, you have not been to St Albans Bay, so you 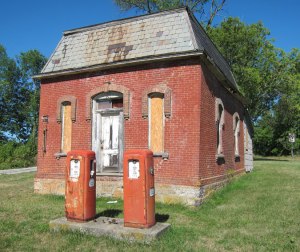 Good thing I did not need petrol in St. Albans Bay – closed since maybe 1960?

had better see what that is like.” So I took a back road west (no surprise there) and took a quiet drive along the shore of the eastern most part of Lake Champlain until I picked up Route 78 in Swanton heading east to Morses Line to cross the border.

Next stop was Bedford, Ontario to pick up Route 202 heading east to explore Stanbridge East and the Missiquoi Museum.  If I had not read about this village in OFF THE BEATEN PATH, I (nor anyone else) would have known to leave the main route (if I can call it that) a

few tenths of a kilometer.  The residents take great pride in their village and the museum.  This area was populated by Loyalists following the American War for Independence even though the Canadian government wanted them further north and away from the border in case they still held sympathies.  My young college docent was very informative, and when I asked she told me she did consider English was her first language, and all those raised in the area are bi-lingual which they feel blessed as a result having more employment opportunities.  You know I cannot get enough history, and the current special exhibit was on the War of 1812 and its impact in the area was very informative.  The residents on both sides of the border did not care what was going on in London or Washington, all they knew was their trade was impacted by embargos.  The solution was smuggling by both sides.  In fact, the British army was kept fed by American beef driven across the border.  I read about skirmishes and raids by the US in Missisquoi Bay and Phillipsburg and need to learn more.  Another part of the permanent exhibit discussed the Fenian raid. These former Irish Civil War soldiers invaded Canada in 1870 at Eccles Hill hoping that their efforts would convince Britain to withdraw from Ireland.  Wow, so much ties together, remember last year in the Republic of Ireland I was attempting to understand the problems the Irish had with Britain over home rule. TOO MUCH TOO LEARN – TOO MUCH FUN.  I then traveled to the museum’s 12 sided barn recently renovated and Canada’s only such structure.  You may enjoy reading about this unique structure, and Alexander S. Walbridge.

From here my guide book suggested following Route 237 to the village of Frelighsburg, which I found to also be quite delightful.  I had a quick sandwich there (by now it was 2 PM) wishing I could have spent more time at one of the restaurants instead, but I had a mission – US 3.  The suggested route next had me head southeast out of the village on

Border Road through the windshield

Richford Road towards a “sleepy border cross” and to turn left instead at the border “and drive slowly along this lovely border road.”  Lovely to say the least, and drive slowly since

Straddling the border – – note border cut through the trees in distance

it was a dirt road hugging the border with fantastic views. The rest of this post will have many images, so do click on the thumbnails for the larger image.  Sadly the dirt ended on paved Route 139 towards Abercorn where I turned on “Route Scenic” (actually the road’s name) through nice wooded mountainous forests.  On reaching Route 243 I choose to make my way across the border to US 105 towards Newport and US 5 to Derby Line instead of staying in Canada and going north up around Lake Memphenmagog.  I had another mission, the Haskell Free Library and Opera House.

Most people cross the border into Canada from our area on I-91 or I-89, and my suggestion is DON’T.  Within almost a stone’s throw are the I-91 and Derby Line, VT crossings, and before crossing the border for the third time today I was stopping at

Haskell Free Library and Opera House which is half in Derby Line and half in Stanstead, Quebec.  The library’s door is in the US, the book stacks in Canada, the reading room straddles the border, and in the opera house upstairs the audience is in the US while the actors are in Canada – (road trip Walpole Players!!!)  Sadly I did not know there were tours of the upstairs opera house, and I had missed the last English tour by about ½ an hour, but as you can see,

In the reading room – US on Left, Canada on the Right

I spent some time in the reading room.

So I don’t take a good picture especially when I have to take it !!!

Crossing the border my final part of this quest began.  I now switched to my Rand-McNally road atlas to cut across the Eastern Township lands taking 143 to 141 towards Coaticook

where I followed 206 to Ste. Edwidge continuing on a ways before turning north on 253 to Sawyerville.  At Sawyerville I turned east again on 210 towards Chartierville where I would turn back to the border. This route was beautiful countryside, farmland with incredible vistas, minute villages, and no reason for curious tourists to be there with no man-made attractions or facilities for travelers.  The final leg of this 100 kilometer, over two hour journey, suddenly turned to dirt (but still suitable for 70 kilometers per hour).  Soon a sign warned trucks of the upcoming 11% grade downhill descent.  “Gee,” I thought, “at least there is a single power line running along-side the road through this dense forest.”  The poles suddenly stopped.  Arriving in Chartierville I was glad I had gotten a few liters of petrol in Ste. Edwidge since the village here consisted of only a few homes.  Turning south, and climbing a hill, there was the US Border, and the beginning of US 3.

I think I had just arrived at the most remote and seldom used crossing, and the friendly customs agents were thrilled to see me and visit, and chat.  Of course they had me sit on the bench while they searched the engine compartment and the cavities where the rear seats disappear.  I had no problem, nor did they except, maybe loneliness.  I asked about the Connecticut Lakes seeing the sign “Trail to 4th Lake” and they suggested for the half hour rocky climb I had the wrong footwear.  “Hey, I don’t have to do that, but thanks,” and off I traveled down this gorgeous part of New Hampshire – truly worth the effort I expended to see, and be able to say “I have been there!”  Here are a few images down the way.

What I also was not fully aware of is that from the beginning of US 3 on the Canadian border back home was well over 200 miles and four plus hours driving time.  So what do I recommend following the about 750 miles I covered Sunday through Tuesday?  Seeing the Connecticut Lakes is great, and I am glad that I have now seen them, but it is an effort unless you have an obsessive need to say, “I’ve been there.”  Stanbridge East and its museum and Frelighsburg are a must, and you should travel to both crossing the border at Morses Line turning off I-89 on VT 78.  And by all means you should then follow the Richelieu River visiting Fort Lennox, Fort Chambly and the canal.  Once you arrive in Chambly you can always pick up Motorway 10 and be in Montreal in no time, but you have gotten a great flavor of the land and history by “shunpiking.”  Just remember lodging is hard to find, but hopefully on my next exploration in this area to fill in what I missed I will have those answers for you.  ‘Till next time, bye, yours, RAY